Most of us have never sailed or cruised a modern trimaran. They aren’t all that common, in the first place, and they are a bit odd in the view of most monohull sailors. They used to be called sailboats with training wheels.

But step aboard a modern tri and take it for a whirl in a fair breeze and you will have you socks knocked off.  Even the heaviest of modern tris will sail at speeds in the mid-teens and the more performance-oriented designs will get the speedo to the low 20s. 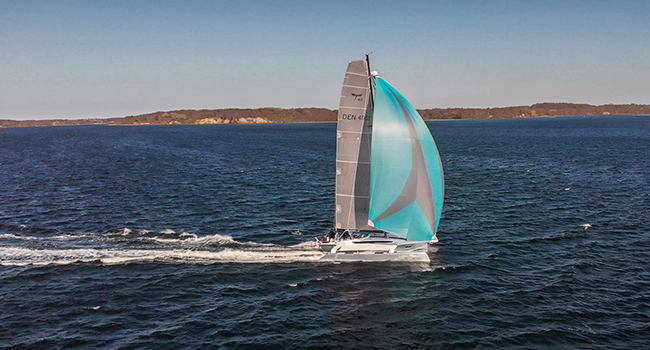 That’s exactly what happened when the owner and CEO of Dragonfly Yachts in Denmark, Jens Quorning, took the brand-new Dragonfly 40 out for its first real sail test in Denmark, where Dragonflys are built.  The breeze was a steady 18 knots. With the full mainsail and the Code 0 set the new 40-foot tri accelerated quickly and soon was pegging the speedo at 18.5 and then 19 knots. They were sailing as fast as or even faster than the wind. Plus, they were sailing on a level boat and they were warm and dry in the large aft cockpit.  The thrill must have been palpable. The boat’s theoretical top speed is somewhere in the mid to high 20-knot range. There’s a link to a fun video of the boat sailing below.

Sailing fast is fun but most of us do not need or want to sail at 20 knots or more for long when we are cruising since doing so means we’re hanging on and paying very close attention to the sails, the boat and the watery world around us. Those speeds are for afternoon sprints and the race courses.  At high speeds, if something goes wrong, if you run into something, or if a person falls overboard, the problems are compounded enormously. 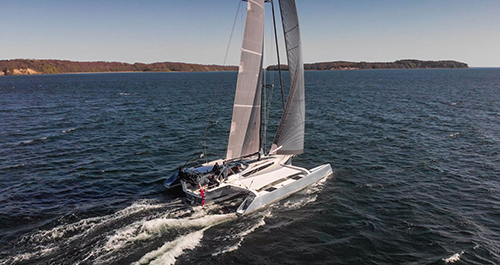 But sailing at 12 to 15 knots, easily and steadily, now that has a lot going for it. Imagine making the Gulf Stream crossing from Ft. Lauderdale to Bimini in the Bahamas in four hours. Imagine sailing from Newport to Bermuda in two days instead of four or five. Imagine sailing right around squalls at sea or racing to a safe harbor before a developing storm. Very appealing.

The new Dragonfly 40 has the speed to do all of that in safety and comfort. The largest and most sophisticated trimaran that Quorning Yachts has ever built, the 40 was designed from the git go to be a couple’s or family cruising boat with all of the systems and comforts modern sailors demand in their new boats. Into the design went the Quorning family’s 50 years of trimaran design and building experience, plus the input from hundreds of their owners.

The main hull is beamier than on earlier Dragonflys and has a large chine that keeps water off the deck and out of the cockpit and adds volume inside the boat for more living space. The floats have wave piercing bows that slice effortlessly through the water. Under the water the hull shape is fairly flat, which makes it easy for the 40 to get up onto a plane quickly and stay there. The centerboard will greatly enhance upwind performance and unlike modern catamarans, the 40 will sail as close to the wind as monohulls. The large high-aspect rudder will make steering the boat a breeze and when raised will allow you to explore shallow bays and coves.

The cockpit is large and split into two zones, the sailing area aft and the lounging area forward. With twin helms, you will always have a clear view of the sails and of what’s ahead. All halyards, sheets and control lines lead aft to electric winches and line stoppers with halyards and control lines running in conduits under the deck. This arrangement means all of the line spaghetti can be kept at the helms and neatly out of the way of those in the forward cockpit. The 40 comes with an open transom but an optional folding stern is available that folds up when sailing and down when anchored and swimming.

The engine and hot water heater are under the cockpit sole and partitioned from the boat’s interior to reduce odors and noise. The hatch is large enough so access to the engine is excellent. The engine runs a sail drive that has a folding propeller.

The floats each have two large access hatches so you can store lines, fenders, spare sails, folding bikes and even kayaks. A special kayak access hatch in the transom of one of the floats is an interesting option. Trimaran sailing is all about keeping the boat light. But, cruisers like their toys and in the 40, there is plenty of space for them.

Between the floats and the hull are the large trampolines that add a huge amount of deck space. These are great for lying in the sun or for having a dozen friends over for sundowners.

The new boat has a permanent bow sprit from which you can fly a Code 0 or asymmetrical spinnaker. Because the 40 is so fast, the apparent wind will often be forward of the beam even when reaching and running, so a Code 0 will be a very useful sail.

The 40 comes in two versions, Touring and Ultimate. The touring has an aluminum mast, a high roach mainsail and a self-tacking jib. The Ultimate has a taller carbon fiber mast, a large square top mainsail and the sail tracks that allow you to fly a larger overlapping genoa.

Like all of her Dragonfly sisterships, the new 40 has a simple way to fold the floats back against the sides of the main hull, which reduces the beam to 13 feet and thus allows you to moor the boat in a normal marina slip. It takes two minutes to fold or unfold the floats.

The deck layout and rigging plans are designed for fun and fast sailing, but everything has been tailored for a couple or family who want to have the best of both the performance and the comfort worlds. 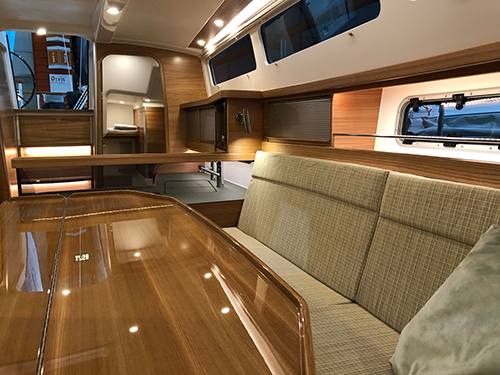 With all of the interior living space in the main hull, trimarans have always had less interior volume than monohulls or catamarans. (The NEEL tris are the one big exception.)  The decision to build their largest trimaran ever by the Quorning family was largely based on the need in the market for a performance tri that was large enough and roomy enough for a couple to live aboard for extended periods without feeling like they were camping. 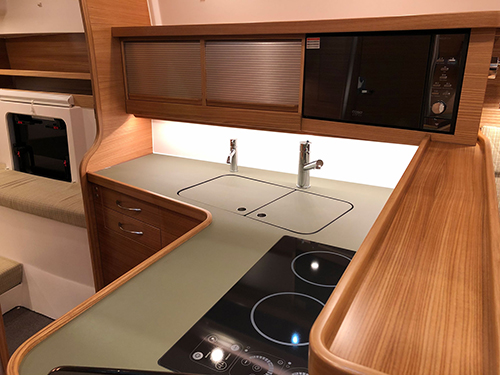 The new 40 has two large sleeping cabins, one in the fore peak and the other tucked neatly under the cockpit. The main living area has the L-shaped galley to port with a stove and oven, refrigerator and plenty of storage for cutlery, plates and dishes and all the supplies a cook needs. The head is across from the galley and has a hand-held shower. The saloon table is built on top of the centerboard trunk and has folding leaves. You can easily get six adults around the table. The port settee can be converted into another double bunk so you have good sleeping facilities for six. 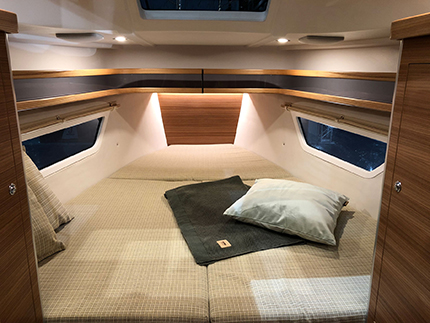 The cabin and salon are full of natural light from the large cabin windows and the multiple overhead hatches. With a white overhead and the light colored veneers and joinery, the interior is bright, warm and inviting. The finish work is of very high quality. 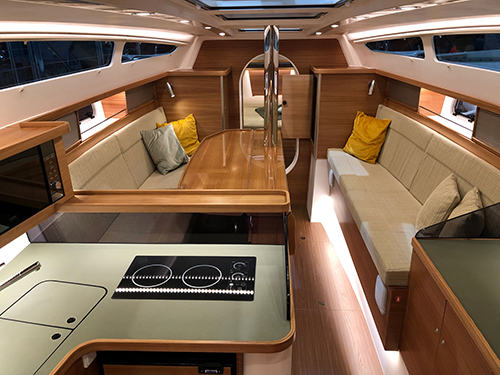 Couples who may not have considered a trimaran because of the cramped accommodations will feel right at home aboard the new Dragonfly 40 and will be comfortable living aboard for weeks and months at a time as they explore their cruising world at ultra-high speeds.

To watch a short video of the Dragonfly 40 sailing click here.