At the Miami International Boat Show last February, I had the good fortune to get to see the brand new Seawind 1600 in the flesh. We’ve been looking at the drawings and photos of the boat for a while, so it was a pleasure to climb onboard. The 1600, which is 50 feet long, is a big step up for Seawind Catamarans. They have specialized in somewhat smaller cats that appeal to cruising couples who embrace an indoor-outdoor lifestyle, simplicity and fine sailing characteristics.

The 1600 is a true offshore performance cruising cat that is big and bold in every way.  The Reichel Pugh designed hulls are fairly narrow for enhanced performance with plumb bows and squared off transoms. The bridge deck has ample clearance above the water so you will rarely be troubled by waves spanking the boat in a seaway.

The 1600 was conceived from the start to be a high-performance cruiser that also combines luxurious accommodations and shoal draft. The hull and deck are vinyl ester, foam-core composites for lightness and stiffness. The cockpit has the recognizable Seawind stepped hardtop with a wide window facing forward above the cabintop.

The rig specified by the designers is a modern fractional design with a high-aspect square top mainsail and an arrangement for three different headsails. Because the mast is positioned quite far aft, the mainsail does not have a long foot and derives its power as a more vertical airfoil kind of like a wing on an airplane. The mainsheet is not run to a traveler but is double ended and rigged to blocks on either side of the cockpit. With practice you can use this system, often called a German mainsheet system, to effectively shape the mainsail as you would with a vang and traveler.

The three headsail options include a self-tacking jib that is about 80 percent of the foretriangle and will be your go-to sail when close reaching or hard on the wind. Forward of the jib, there is a second fore stay on which you can have a large reaching and running sail, such as a screecher or Code O, that will give you a ton of horsepower. Forward of the reaching sail on the bowsprit, you can rig a running sail on a top-down furler that will give you great light air and running performance.

Sail trim and all control lines are managed at the back of the cockpit where all of the lines from the mast –halyards, control lines, etc.—run aft in a conduit under the saloon and cockpit soles to a large electric winch on the centerline. There are two sheet winches behind each of the helms for the screecher or asymmetrical spinnakers. 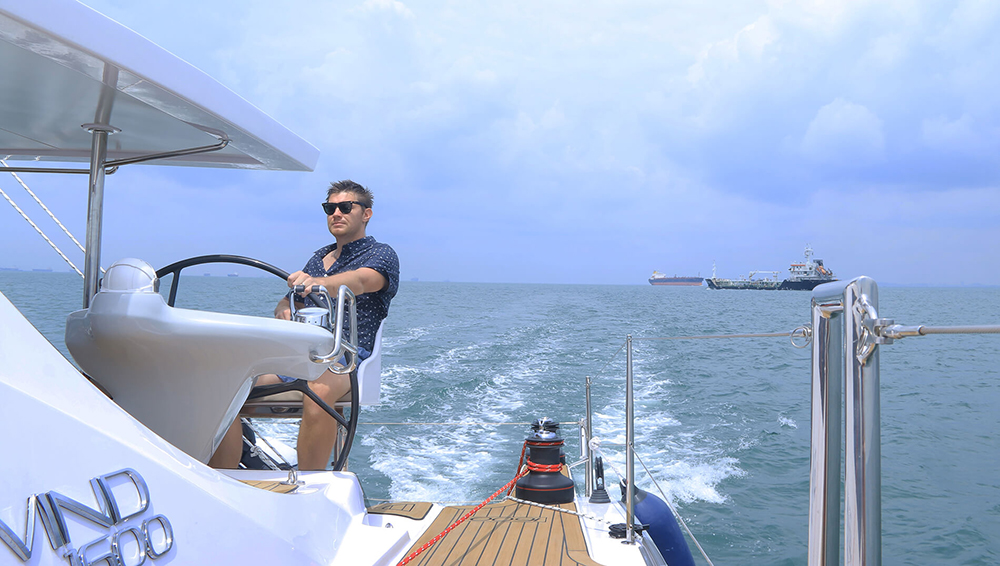 To achieve both performance and shoal draft, the boat has been rigged with daggerboards and retractable rudders. Unlike most performance cruisers, the daggerboards do not hoist above the side decks when raised. Instead, they fit into enclosed boxes below decks where they are out of the way when raised. The rudders are in cassettes and can be raised manually. With the boards and rudders up, the 1600 has a draft of only two feet which will allow it to explore very thin water – perfect for regions like southern New England, the Chesapeake Bay, the West Coast of Florida and the Bahamas.

The 1600 has twin helms that are set quite far aft and both have wide bench seats for two people and full instrumentation so you can run the boat from both sides without having to dash back and forth to get to the engine controls.  The cockpit itself is comfortable and well protected from sun and rain.  The hardtop has been designed to accommodate a large array of solar panels, which help to make the 1600 self sufficient for long range cruising.

Unlike her sisterships, the cockpit and saloon do not form a single living space. Instead, you go down two steps and through a doorway from the cockpit to the saloon. The saloon is surrounded by large windows so you have great views from anywhere whether standing in the galley or sitting in the dinette. The galley is huge and very well appointed with plenty of counter space, large fridge and freezer and tons of storage. The dinette will seat six easily for meals. The nav station next to the dinette faces forward so you will be able to operate the boat under sail or power here in rainy weather and will only have to dash out into the cockpit to trim sails.

The three-cabin version of the 1600 has the master suite in the starboard hull. This is a huge living space and will be great for couples who plan on living board. It even has a walk-around double berth, which is rare on catamarans. Plus, it has a large head with a big shower stall. With four large port holes and a deck hatch, the master suite is full of light and has great ventilation. The port hull has two guest cabins and a shared head and shower.  The four-cabin version has two cabins in each hull.

The Seawind 1600, like all Seawind models and the Corsair line of trimarans that are part of the same company, is built near Ho Chi Min City in Vietnam.  Richard Ward, who started the company in Australia before moving it to Vietnam is Australian and the team that manages the build of all boats is Australian.  The craftsmanship and care that goes into each boat is evident from the moment you step aboard.

For couples looking for a big, roomy fast cruising cat that is luxurious, fun to sail and capable of exploring shallow anchorages the new Seawind 1600 would be a great choice. Read more here