It has been two years since Groupe Beneteau introduced the new Excess line of cruising cats to their portfolio of sail and powerboat brands. The concept was from the start to create a line of cats that would appeal to younger buyers who were looking for adventure and embraced the indoor-outdoor sailing lifestyle. The first two boats, the Excess 12 and 15, were based on earlier Lagoon models that had been re-engineered and redesigned. 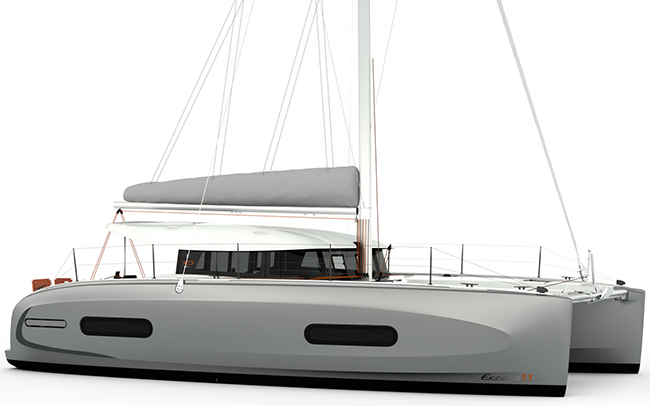 This year, Beneteau launched the all new Excess 11, which at 37 feet is one of the smallest production cruising cats on the market. The boat shares many basic details with the Excess 12 and 15 but is a more modern design that packs a huge amount of accommodation and sailing capability in a small package.

The hulls have a noticeable reverse curve in the sheer line that give them a rakish modern look. With plumb bows and squared off transoms the 11 makes the best use of its waterline to enhance sailing speed and reduce pitching in choppy water. The hard chine just above the waterlines adds volume inside the boat while below the chine the hulls are narrow for better sailing performance.  The cabin top is contoured so it blends nicely with the wrap-around saloon windows and the curve of the sheer line.

The rig on the 11 is a fairly standard sloop arrangement with a large mainsail for enhanced performance and a small self-tacking jib for ease of handling. The short bowsprit allows you to fly a downwind sail that can be on its own roller furling device so it can be deployed and then furled again quite easily.

All lines lead aft to the cockpit with most landing at the starboard helm. The mainsheet is double ended so the big sail can be trimmed from both helms. With this style of mainsheet, you don’t need a traveler since you can use the sheets to shape the sail. 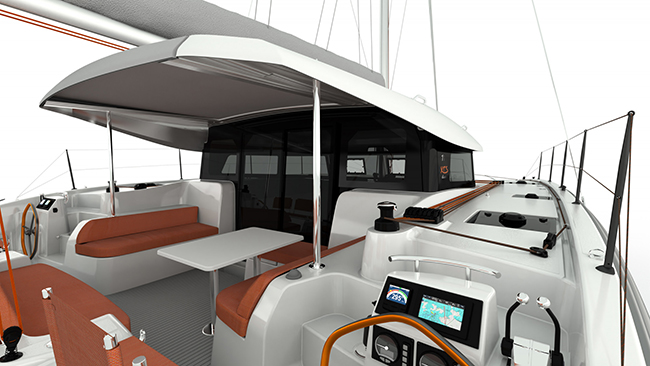 The cockpit on the 11 is intended to be the social center of the boat and has a large table and  two bench settees, plus the two-person benches at each helm.  The twin helms are at cockpit level instead of being raised so those sailing the boat will be right in the mix with those lounging in the cockpit. Visibility from the helms is good since you can see forward right thorough the huge saloon windows.  Small Biminis are mounted over each helm for some protection from the elements. The helm seats fold up to allow egress from the cockpit to the transoms. Like the 12 and 15, the hardtop over the cockpit has a large sunroof that can be opened in good weather. 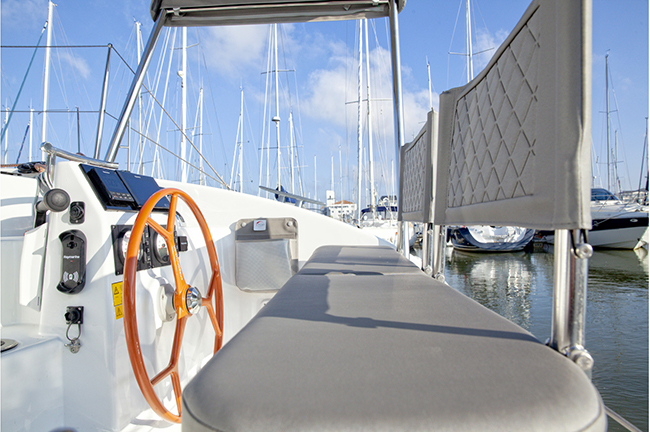 The saloon is compact with the dinette forward to port, the galley to starboard and a small chart table.  With large sliding doors between the saloon and the cockpit, the design is set up for the two spaces to act like one.

The 11 can be set up with either a three cabin two-head arrangement or a four-cabin, two head plan.  In the three cabin owner’s version, the starboard hull is all one suite, while the port hull has the two guest cabins. In both layouts, the heads have separate shower stalls, a feature rarely found on cats under 40 feet. 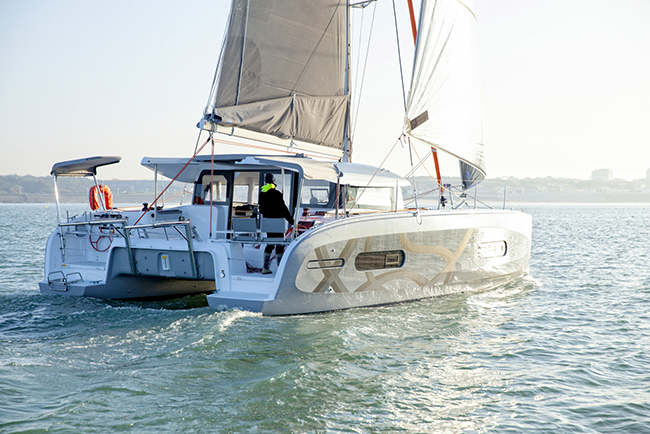 While the Excess 11 is definitely the bright new member of the Excess family, it is also a cousin to the venerable Lagoon 38 which was the most popular cruising cat ever built. With more than 1,000 38s sold, it is arguably the cat that launched the catamaran revolution. Now, with the new Excess 11, Beneteau may well be one the way to launching the second catamaran revolution.